So how was it traveling as a first-time solo Indian female traveller? Did I like it? Will I do it again? These are the many questions I have been asked ever since I returned from my first solo trip. So let me try my best to answer them.

Why did I decide to go as a Solo Indian Female Traveller?

So before I start, let me tell you the factors that made me decide to go solo this time. Even though I did some roaming around in the USA by myself, I have never been on a solo trip. I never had to do it till now. Being from a traveling family, I always had company whenever I wanted to go anywhere. I was born as one of a twin. So that meant I was always stuck with someone (just kidding, Ramya) for the rest of my life. Since I live in India, there never has been a shortage of friends. I have always been amused by the fact that some of my friends need company to go to the bathroom even when they are in office. Even at the office, if I decide to have a quiet meal in the pantry, I am surrounded by at least 5 people who just can’t bear the thought of me eating alone.
So you got the gist, right? I was never encouraged and never had an opportunity till now to travel solo.
Then what changed this time? Ever since I started reading multiple travel blogs over the past year, I have always wanted to travel solo. I wanted to see what was it like to be traveling solo. Was it as liberating as they all claimed it to be? It was weird coming to this decision since I am in my early thirties and I was traveling alone for the first time in my life.
Another factor was the time I had. I wanted to take a break between my two jobs and no-one I knew had the convenience to take such a huge break. So then it was decided and I booked my tickets to Europe.
So how did my family take it? Surprisingly well. At least in front of me. I am pretty sure that my mom would have had some high BP issues when I announced it to them after booking the tickets. They did have a hint but they had no clue that I was going to do something this extreme. In the process I ditched my sister and brother in law. I was supposed to go to Tanzania with them to meet our friends (including the wildlife) but when I decided to go solo, they went ahead without me.

Would I recommend solo travel for Indian female travelers?

Yes, I would. As long as you are sensible and do not do anything utterly foolish, you will be fine. Be open to change and you will have a gala time. Just don’t wait until your thirties like me to start traveling alone. Yes as an Indian, I know we are conditioned to think that we cannot travel on our own. Why don’t you try it and see what I am talking about? After all, we prove our worths every day fighting the gender inequality in this country.

I know I couldn’t have done it without the support of my crazy family. I know I gave my mom many sleepless nights but that she would have had that even if I was traveling with someone else. So thank you for being ‘My crazy family’. 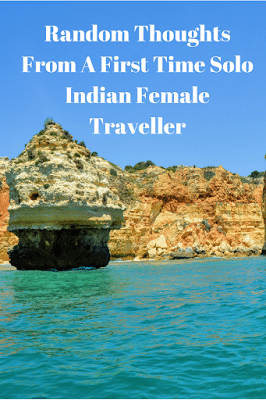 END_OF_DOCUMENT_TOKEN_TO_BE_REPLACED

We'd love to connect with you on any of the following social media platforms.